The Journal of Balkan and southeast European studies is based in the Department of Modern Languages at the University of Mississippi.

Balkanistica is listed in and abstracted by the MLA Bibliography, the ABC CLIO Library, Linguistics and Language Behavior Abstracts, and Linguistic Bibliography. Balkanistica is also listed in Elsevier’s Scopus, the most recent editions of Central and South-Eastern Europe and Eastern Europe, Russia and Central Asia, volumes produced by Europa Publications covering the Balkans, Eastern and Southeastern Europe, as well as Cabells Journalytics, an independent database of scholarly journals. Balkanistica participates in a journal exchange and is available at these universities and institutions. 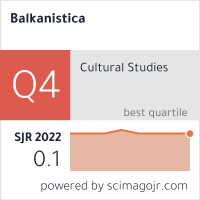 Balkanistica invites papers written in English that study the Balkans or Southeastern Europe–Albania, Bulgaria, Greece, Hungary, Macedonia, Moldova, Romania, Slovenia, Turkey, or the successor states to the former Yugoslavia–in disciplines including (but not limited to) anthropology, archaeology, culture, economics, education, history, language and linguistics, literature, political science, sociology, as well as comparative or contrastive studies of two or more countries and/or disciplines.

All submissions undergo a double-blind refereeing process; authors should conceal their identity in the manuscript and follow one of the generally accepted styles within their specific discipline. Upon acceptance for publication, the Editor will work with the author to ensure appropriate formatting and style.